How Bad Carbs Misbehave in the Body

Bad carbs are fast carbs. Because they have no friends to hold them back, they rush into the bloodstream quickly and overwhelm the energy delivery system. Then all sorts of mischief begins to take place that makes the body feel sick and tired rather than energized. Here’s what can happen.

Bad carbs are a major contributor to the development of insulin-resistant diabetes. Here’s how body’s sugar-using system can malfunction, causing blood sugar levels to soar. The digestive system breaks carbohydrates down into the simple sugar glucose, which provides energy for all the cells of the body. Glucose gets to the cells via the bloodstream. To get inside the cells, glucose needs assistance from insulin, a hormone produced by the pancreas. On the surface of every cell are receptors that welcome insulin. When insulin from the blood parks itself in one of these receptors, it’s like a button is pushed and a door opens to let glucose come into the cell. But when carbohydrates are digested too fast, there’s a lot of glucose in the blood. The more glucose there is in the blood, the more insulin is released by the pancreas. 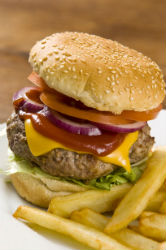 But there’s a limit to how much glucose can get through the cell doors. Eventually the cells cry “Overload!” and the insulin is no longer able to activate the automatic buttons that open the doors and usher glucose into the cells. The cells resist what the insulin is telling them to do, and over time, Type 2 diabetes (also called insulin-resistant diabetes) can develop. If the diabetes is left untreated (the symptoms are not as obvious as in Type 1 diabetes), all that extra glucose circulating in the blood will do serious damage throughout the body. The body eventually pays a hefty price for the “fast living” of these fast carbs.


Parents of frequently ill children often tell us, “You know, once we cleaned up his diet, he hasn’t been sick as often.” Excess bad carbs can depress the immune system. Besides causing excessive inflammation throughout the body, excess bad carbs suppress white blood cell function, the soldier cells that circulate throughout the body and kill invading germs. Drinking two and a half 12-ounce sodas can reduce the germ-killing ability of white blood cells by 40 percent. The effect can begin within fifteen minutes and can last for a few hours.


We call healthy carbs “lean carbs,” and bad carbs “fat carbs.” Sedentary bodies may not be able to use all the sugar released into the bloodstream by the digestion of bad carbs. So, what happens to the excess sugar floating around in the bloodstream? It has to be stored somewhere. The body turns it into fat and deposits the fat in warehouses all over the body. These warehouses have a seemingly unlimited capacity. The more excess sugar the body needs to store, the bigger the warehouses get. Waistlines, arms, and thighs expand as the warehouses do; some children “fill out” way beyond what is healthy.

The problems that result are more critical than just needing to buy bigger jeans. Fat, especially fat deposited in the abdomen, around all the body’s important organs, doesn’t just sit there. It spews out all kinds of chemicals that increase a child’s risk for diabetes, cancer, strokes, and cardiovascular disease. Consider the carbs in an apple. Because it has fiber in it, these carbs are slower to get into the bloodstream. (The fructose sugars in fruit and the galactose sugars in dairy first have to make a stop at the liver to be broken down into glucose before they can be released into the rest of the bloodstream, so they don’t trigger insulin as much in the first place.) In a nutshell, bad carbs or “fat carbs” trigger the insulin cycle faster. “Lean carbs” don’t trigger the insulin cycle as much, so they are less likely to be stored as fat. Also, because “lean carbs” are packaged with fiber, fat, or protein, you’re less likely to overeat them than you are bad carbs, which are not packaged with the fill-up factor of protein, fat, or fiber.

Bad Carbs Misbehave in Your Brain

One day I was talking about carbs with nine-year-old Jacob in my office. I was telling Jacob how certain foods help him get better grades and pay attention better at school. After hearing my explanation, he said, “Dr. Bill, you mean there are smart foods and dumb foods?” Jacob was nutritionally correct.

Healthy carbs are smart foods. The brain depends on them. While the brain makes up around 2 percent of a child’s total body weight, it utilizes around 50 percent of the carbs the child eats. The brain prefers healthy carbs because their slow and steady rate of digestion provides energy at a steady rate. In contrast, bad carbs flood the bloodstream and the brain with more sugar than it can handle. The excess sugar causes a problem. First, it stimulates the release of serotonin, a neurotransmitter that sedates the brain. This is one reason you should avoid feeding kids bad carbs at breakfast – those busy little brains need to be as alert as possible at school.

Stay Away from Excess Sugar

Next, excess sugar makes the brain jittery: All that glucose in the bloodstream stimulates the pancreas to release a lot of insulin. The insulin mops up the glucose quickly, and blood sugar levels plunge. Suddenly the brain does not have enough fuel, and it crashes. Kids who are fed bad carbs for breakfast feel anxious and jittery by mid morning and can’t concentrate on their schoolwork – they rebound from high to low blood sugar.

Unlike muscles, which store their own sugar supply to which they have continuous access, the brain doesn’t store sugar. It must depend on a steady supply of sugar from the blood. This is why grazing on healthy carbs helps the brain work at peak efficiency. Frequent small meals of healthy carbs digested at a slow, steady rate provide just the right amount of sugar all the time. We suspect that the epidemic of learning disabilities in schoolchildren might be helped a great deal by eliminating “feeding disabilities” – brains functioning at less-than-optimal levels because of junky breakfasts.

Don’t Stress Out Your Brain


The ups and downs of blood sugar resulting from the too-fast digestion of bad carbs causes a child problems that go well beyond a fuel-deprived brain. Too much of the hormone insulin in the blood throws other hormones out of balance. When blood sugar plummets, the body sends out a survival signal: “I need more sugar, and fast.” This triggers the release of stress hormones, such as cortisol, from the adrenal glands. Cortisol tells the liver to release the sugar stored there, sending the blood sugar levels back up. Now the child has to cope with the high levels of stress hormones, which make him unsettled and unhappy. He pokes the kid next to him or talks to a classmate when he’s supposed to be quietly working on his math. Soon he’s in trouble with his teacher. Biochemical instability leads to emotional instability, which makes it hard for children to cope with their social and educational environments.

We think of a healthy breakfast as a “Happy Meal” and try never to choose an “Unhappy Meal.“