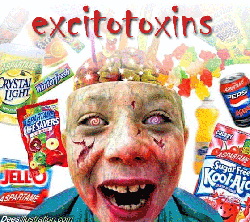 “Excitotoxin” may be a term that is new to you. Excitotoxins are chemical food additives such as aspartame and MSG (Monosodium Glutamate) that overstimulate neurons in the brain. When these neurons are overstimulated they quickly become exhausted and die. In short, excitotoxins can alter the chemistry of the brain.

Studies in experimental animals show that some of the chemicals that are routinely added to processed food (mainly as flavor or color enhancers) can damage the parts of the brain cell called the mitochondria, the energy center of the cell. These chemicals also throw neurotransmitter activity out of balance. Whether this same neurochemical upset occurs in humans is controversial. Some medical scientists believe that excitotoxins play a role in the development of many different neurological diseases, including Parkinson’s disease, seizures and Alzheimer’s disease.

These additives serve no useful nutritional function, so why take the chance consuming them? It’s best to avoid food additives, especially aspartame and MSG, as much as you can.

Here’s where your food-mood observations help. Some children, and some adults, experience severe headaches and mood swings following the ingestion of aspartame or MSG, for example. Some notice only that they feel “weird” or that they can’t focus as well. It is good practice to scrutinize the labels on food that your kids eat for any ingredients that sound like they came from a chemistry lab rather than from nature, and ban these foods from your home. Your kids will be healthier as a result.

Finding these ingredients to avoid is sometimes difficult. For example, MSG may not be listed as an ingredient on a food’s nutrition label but instead is found in hydrolyzed vegetable protein which is listed on the label.

For the brain health of your family, avoid processed foods that contain these additives:

The body, in its wisdom, protects growing brains and tissues from some toxins in the diet. The blood-brain barrier keeps many potentially harmful substances from crossing over into the brain. Yet it cannot protect brain cells from every potential threat. While the brain can probably safely process some of the chemical substances added to foods, it’s best to avoid excessive amounts.

The best way to protect yourself and your family against the negative effects of excitotoxins is to simply avoid them. You can also build up your body’s natural defenses by eating nutrients found in real, whole foods that the brain can use to repair connections.  We call these “smart foods”.

Here are the best and worst foods for the brain: