Doctors spend much of their time treating patients suffering from -itis illnesses: arthritis, bronchitis (asthma), colitis (inflammatory bowel disease), and dermatitis (eczema), and another –itis that I call cognitivitis, better known as Alzheimer’s disease. Pharmaceutical companies cater to these patients, who annually spend over $20 billion on anti-inflammatory drugs. Many people with stiff, achy, itchy, and bloated bodies are starting to think there must be a safer way to reducing inflammation. There is: Go fish!

The Concept of Inflammatory Balance

Your immune system is genetically programmed to search out foreign invaders (germs) and destroy them before they can damage your tissues. Inside your body you have two armies. One group, let’s call it “the fighters,” kills invading enemy germs. This battle causes inflammation. Biochemically, the fighters are known as proinflammatories. The other group, let’s call it “the healers,” cleans up after the battle. The healers balance wear and tear with repair. These healing biochemicals are called anti-inflammatories. These armies are in inflammatory balance when the wear and tear of the body’s biochemical battle is healed by just the right amount of repair. 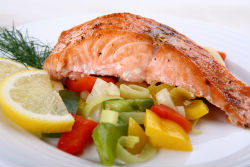 If the wear and tear of the battle—inflammation—overwhelms the body’s ability to repair its tissues, leaving rough, inflamed surfaces, those tissues have an -itis; for example, inflamed joint surfaces (arthritis) or inflamed airways (bronchitis). The worst-case scenario of immune system trouble happens when the fighters get confused and attack the body’s own tissues when germs aren’t even there. When the body attacks itself, it’s called having an autoimmune disease.

When you do too much chemical abuse (e.g., eat junk food) and physical abuse (e.g., sit too much) to your body, the foreign food chemicals that you eat (e.g., factory-made oils, chemical food additives) infiltrate your tissues. After this sticky stuff worms its way into healthy tissues, the tissues change their chemistry. The fighters-in your immune system then wrongly conclude that these tissues – usually those that line joints, airways, intestines and blood vessels—are foreign and don’t belong there. So they attack them, causing inflammation. If you don’t eat enough chemicals that help your body in reducing inflammation like omega-3s and antioxidants, tissue damage–itis–results. The soreness you feel is the result of that losing battle being fought inside you.

Both doctors and patients continue to search for arthritis pain relievers that are safer than prescription drugs. They may have found one. In one study, doctors specializing in arthritis-induced back pain prescribed between 1200 and 2400 mg of fish oil per day to their patients. Of 125 patients taking fish oil for an average of seventy-five days, 60 percent reported improvement, and 59 percent were able to quit taking their prescription NSAID (nonsteroidal anti-inflammatory drug) medication.

Some doctors recommend that you eat less omega-6 oil and more omega-3 oil. If you’re like most people, eating ten times more omega-6 oil than omega-3 EPA/DHA oil, try changing your dietary ratio of omega-6s to omega-3s to 3:1. Omega-3s are the smooth operators that prevent excessive wear and tear and exaggerated repair. Their cousins, the omega-6s (vegetable oils, including soybean and corn oil, most salad dressings, and fried foods), are proinflammatory. When ingested in excess, they overstimulate the immune system, causing faulty repair. Dr. William Harris, a leading omega-3 scientist, emphasizes that reducing inflammation won’t happen just by eating less omega-6 oil. You must also eat more omega-3 EPA/DHA fish oil. Normally, when the omega-3s and the omega-6s peacefully coexist, the body is in inflammatory balance. When the omega-3s are insufficient to counteract the omega-6s, the body gets out of balance.