Do you and your kids have a hard time controlling your carb cravings? Can you eat just one cookie, or do you need half a dozen? Do your children crave soda and sweetened sports beverages?

You are not alone.

For many people, because eating sweets triggers an increase in levels of serotonin, the body and brain come to depend on carbs for a sense of well-being. When the serotonin level dips, carb cravers use soda or sweets to boost their mood again. Or they crave a high-carbohydrate breakfast after using up their carbohydrate stores during many hours of sleep. (A high-carb breakfast is okay, but make sure it’s a healthy carb breakfast and includes some protein!) In contrast, fat cravings tend to be highest in the evening, when the body needs to store fat for the overnight fast.

Kids like carbs, and they always will. Your job is to get their carb cravings to be for healthy carbs and stay away from the junky ones.

Here are some time-tested tips to curb your child’s carb cravings:

Babies are born with a sweet tooth, so you need to shape those little tastes in a healthy-carb cravings direction right from the start. Here’s how:

Parents: don’t be nutritional wimps. A mother in our practice offered this excuse: “My child will only eat yogurt sweetened with corn syrup.” Who’s in charge here? Instead of shaping your child’s tastes toward unreal sweeteners, add fruit, like blueberries, to plain yogurt.

To blunt the blood sugar highs and lows of a high-carb meal, be sure that meals-and snacks-have adequate protein and fiber. Numbers may vary slightly depending on the age of the child but as a general guide:

Above all, limit your child’s carb cravings for liquid carbs–those sweetened beverages that are simply liquid candy, containing all carbs and no protein and fiber. These include sodas, sports drinks, juice drinks, and anything else whose main ingredients are water plus sugar or corn syrup. Don’t stock them in your pantry, and don’t even buy them. If you buy junk carbs, your children will assume it’s okay for them to eat and drink them. If children are offered an occasional sweetened beverage as a sweet treat, be sure they drink it with a meal.

4. Have Them Graze on Frequent Mini-Meals

If the junky carbs are in your kitchen, how can you expect your child not to want them? Banish the junky-carbs and fill your cabinets and refrigerator with healthy-carb snacks, carbs that are packaged naturally with protein and fiber. Keep water bottles handy so that thirsty kids learn to drink no-carb water rather than high-carb beverages. Cute water bottles may sound frivolous, especially if they are not in your budget, but if they help make water look appealing to your kids, they’re worth it.

Little cravers are notoriously susceptible to carb cues that trigger their carb cravings, such as TV ads and fast-food restaurants. The solution? Less TV and fewer restaurant meals. Out of sight is out of mind. 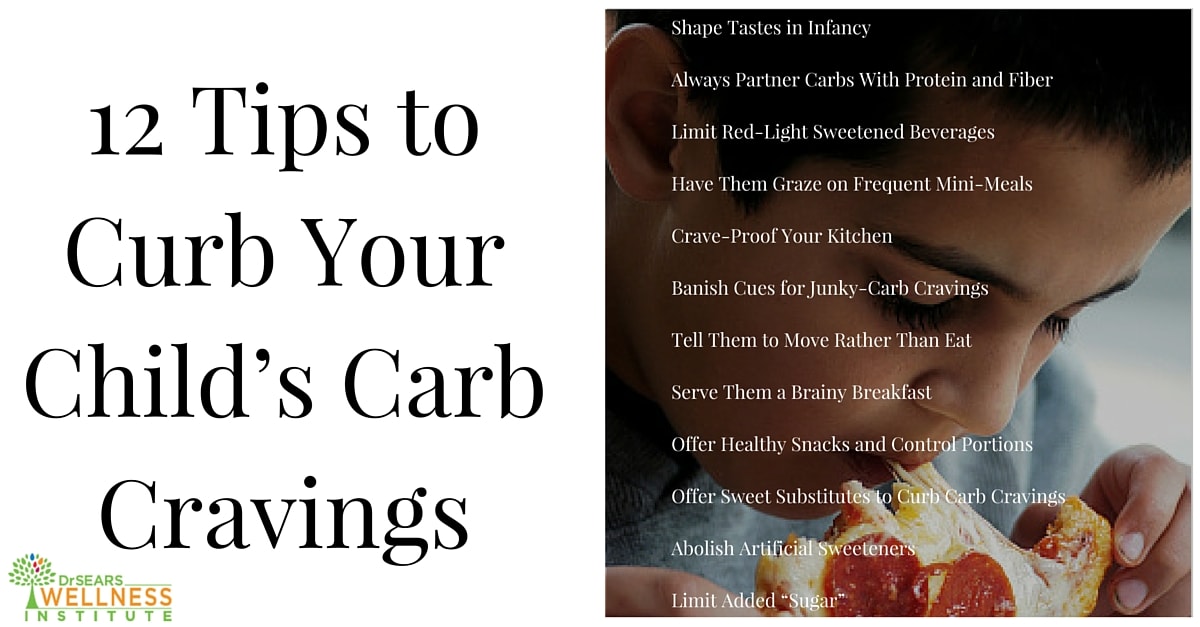 7. Tell Them to Move Rather Than Eat

Kids who are bored or stressed are likely to have carb cravings. Physical activity will take care of the craving and the stress or boredom. Tell your children, “When you feel the urge to eat, get up and run instead.” Send kids outside to shoot baskets, kick the soccer ball around, turn cartwheels on the lawn, or just race around the park.

Learning to work off carb cravings and mood upsets with physical activity is a valuable tool for children, and a habit that will benefit them for the rest of their lives. Exercise stimulates the release of feel-good hormones, just as sugar does, and it’s good for the body! Research has shown that the calm feeling that follows a workout decreases the appetite, especially carb cravings. In fact, an interesting study showed that following a brisk walk, carb cravers had a reduced urge to snack on sugary foods.

8. Serve Them a Brainy Breakfast

A healthy carb breakfast can lessen a child’s junky-carb cravings throughout the day.

Carb cravings help to make kids obese, and in turn, obesity perpetuates their cravings for carbs. Break the cycle by offering kids lean meals and lean snacks. Fruit and nuts are sweet and crunchy alternatives to cookies, chips, and crackers. They offer healthy carbs and other valuable nutrients. Nuts offer protein and healthy fats as well. When it’s time for the occasional treat, give your child a couple of cookies rather than handing him the whole box. Never let your child eat out of a container. He won’t know when to stop.

In trying to raise a sugar-free kid, you can satisfy a sweet tooth without serving foods that contain a lot of sugar or corn syrup sweeteners. Try these strategies:

For adults, sipping a hot beverage is a time-tested way to suppress hunger pangs. Fruit-flavored herbal teas offer flavor without carbs and calories. Some people enjoy a squirt of lemon juice in hot water for a calming, crave-easing treat. Even if your child is not yet a fan of warm drinks in mugs (with the exception of hot chocolate), make her aware of these alternatives by setting an example. Your little carb-craver will carry this information into her teenage and adult years and use it to help her stay on the right track.

Research has shown that this sweet-tasting spice makes insulin work more efficiently to stabilize blood sugar levels. As an added perk, it even reduces cholesterol levels and other artery-clogging fats in the blood. Sprinkle a teaspoon of cinnamon on cereal, oatmeal, or in a smoothie to heighten the sweet and healthy taste and reduce carb cravings.

Unsweetened fruit is a tasty way to sweeten yogurt or top pancakes and waffles. Our family favorite is blueberries. Mix 2 tablespoons of fresh or thawed frozen blueberries into cereal, oatmeal, or plain yogurt. Or try yogurt and ripe bananas on your morning waffle. You can also try mashing strawberries with a fork. This makes a tasty topping on waffles or pancakes. Try whole-grain pancakes or waffles, or half whole-grain.

Xylose (commercial name Xylitol) is a naturally occurring carbohydrate found in many fruits and vegetables, particularly plums, raspberries, and cauliflower, and works great for curbing carb cravings. It is just as sweet as sucrose (table sugar), yet it has some molecular quirks that could make it a healthier carbohydrate. Xylose has 40 percent fewer calories. Unlike sucrose, xylose is absorbed slowly and incompletely through the small intestine into the blood; and once absorbed, it is metabolized independent of insulin. This metabolic quirk keeps it from triggering the roller-coaster effect of blood sugar swings that you get with sucrose. Xylose also inhibits the ability of bacteria to adhere to the teeth, reducing the production of acids that dissolve tooth enamel and lead to tooth decay, making it a less worrisome sweetener for the sweet tooth and a favorite ingredient in chewing gums. Yet, these apparent perks are not a license to overdose on xylose. Because it is not absorbed into the bloodstream as quickly as sucrose and may remain in the intestines longer, eating too much xylose too fast (more than the same amount of table sugar) can result in uncomfortable gas and diarrhea.

We advise you not to give your child any food that contains an artificial sweetener, such as aspartame. Although aspartame contains 4 calories per teaspoon compared with 16 calories per teaspoon for table sugar, saving a mere 12 calories isn’t worth the potential risks associated with ingesting chemicals. When we surveyed the research on the safety of artificial sweeteners, we saw a lot of controversial findings. The U.S. Food and Drug Administration gives aspartame and other artificial sweeteners on the market the status of “generally regarded as safe” (GRAS). Don’t you wonder what they mean by “generally”? Should you feed your kids chemicals that are “generally” safe? We believe that any chemically manufactured sweetener is suspect, especially for growing children, who are too precious to be experimented on. Besides, artificially sweetened beverages and snack foods won’t curb your child’s carb cravings or teach your kids to appreciate the healthy foods that are good for them. Serving your kids fake sweets only reinforces their carb cravings for factory-made foods. We believe it’s better to just leave these foods out of your family’s diet (and out of your house).

Surprising amounts of sugar lurk in many store-bought processed foods such as ketchup, spaghetti sauce, barbecue sauce, baked beans, and even soup. While a teaspoon or so of sugar (4-5 grams) in an otherwise healthy wholegrain cereal (one with at least 5 grams of protein and 3 grams of fiber) is fine for kids (though a tablespoon of fruit is a healthier sweetener), too much added sugar can turn a healthy food into oversweetened, unhealthy junk. Fruit-flavored yogurt is a leading example. Compare the nutrition information on plain yogurt with one flavored with fruit. There is less protein but there are a lot more carbs and a lot more calories in the flavored variety, and all of those extra carbs are fast carbs from sugar or corn syrup sweeteners. The carbs in plain yogurt come from milk (lactose), and the protein (and in some, fat) in the yogurt slows their absorption.

The World Health Organization (WHO) recommends limiting added sugars in the diet to 5 percent of your calories consumed per day. For an adult of a normal body mass index (BMI) that comes out to about 6 teaspoons per day. That’s less sugar than you’ll find in one 12-ounce serving of soda. It is nearly impossible for parents to determine how much sugar has been added to processed foods. The sugars line on the Nutrition Facts label gives the amount of sugar per serving, but it does not differentiate between sugar that naturally occurs in a food and added sugar. In plain yogurt, the amount of sugar listed on the label is nearly equal to the amount of total carbs. Plain yogurt has no added sugar, yet the natural sugar lactose gets the same treatment on the label as table sugar or high-fructose corn syrup. To get a sense of how much sweetener has been added to a food, be sure to check the ingredients list as well as the nutrition information. Ingredients are listed from greatest amounts to least. If sugar or corn syrup appears near the top of the list, you may want to avoid this food.