Nutrition plays a powerful role in improving brain health.  With self-reported mental wellness issues more than doubling since before the pandemic, empowering individuals with the knowledge, tools, and resources to help improve brain health is crucial. During their training, our health coaches learn topics that address these types of issues, including the connection with spices that we thought you would benefit from as well.

This issue is one of many important topics that our health coaches learn during their training, including the connection with spices that we thought you would find beneficial as well.

Making simple changes such as adding antioxidant-rich, anti-inflammatory spices regularly to their meals can have a significant impact on wellbeing. Consider oregano, for example. According to research conducted by Dr. Daniel Amen “Dried oregano has thirty times the brain-healing antioxidant power of raw blueberries, forty-six times more than apples, and fifty-six times as much as strawberries, making it one of the most powerful brain cell protectors on the planet.”

Print the full list of spices as a PDF that you can display in your home.

Best Spices for the Brain

Turmeric – It is one of the most important spices to include in the diet. Not only is it an extremely powerful antioxidant, but it also decreases plaques in the brain, improves memory, reduces depression and anxiety. Since turmeric doesn’t have a lot of flavors and doesn’t need to be cooked,  it’s easy to add to foods like sprinkling on eggs or adding on top of a salad.

Cinnamon – It is an everyday spice that lowers blood sugar, and improves attention and memory. it’s easy to add to foods like oatmeal and apple sauce, or even add into tea or coffee. 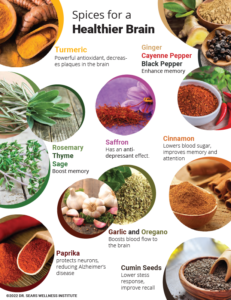 Oregano –  Boosts blood flow to the brain and is one of the highest antioxidants of all spices.