Do you have a hard time controlling your cravings for sweets or other unhealthy foods? Just remember, you are not alone! The “wisdom of the body” principle says you’ll crave the nutrients you need. But, years of unwise eating and a lot of cultural conditioning heavily contribute to what causes food cravings and have taught our bodies to crave foods they don’t need.

Carbs and what causes food cravings

New research suggests there is a physiological connection between carbs and what causes food cravings. Sweets trigger an increase in serotonin – a mood-elevating hormone. The body and brain get used to this higher level of serotonin and even depend on it for a sense of well-being. So, when the serotonin level dips, the craver dips into the chocolate to “correct” the situation. The cycle continues, and in time the sweets eater makes the association between food and mood and believes that sweets ensure well-being.

We want to feel relaxed

Another group of hormones, called “endorphins,” are also implicated in what causes food cravings. Sweets trigger the release of endorphins, the brain’s natural narcotics, helping you to relax when stressed. So, it seems there is a biochemical basis for the good feelings you have after munching on a morsel of chocolate. Endorphins are another part of the biochemical explanation for feelings of well-being. Exercise and sex also trigger endorphin release, and one or the other of these may be a better choice than another slice of cheesecake.

Besides serotonin and endorphins, many other neurochemicals affect what causes food cravings. Once such is neuropeptide Y (NPY), whose job is seeing that your body (especially your brain) gets enough carbohydrates for energy. As your sugar stores are used up, the blood-sugar dip triggers the release of NPY, which prompts the brain to crave more carbs. This is the neurochemical explanation for why most people prefer a high carbohydrate breakfast after using up their carbohydrate stores during a ten-to twelve-hour overnight fast. When your fat stores are being depleted, a fat-craving neurochemical called “galanin” is released. Crash dieting and stress can also trigger the release of these neurochemicals that urge you to heed your body’s demand for fuel. As you might expect, given the wisdom of the body, levels of food-craving neurochemicals fluctuate throughout the day. The carbohydrate craving chemicals (e.g., NPY) are highest in the morning, stimulating you to eat a high carbohydrate breakfast. Fat-craving neurochemicals are highest in the evening when the body needs to store fat for the overnight fast.

What causes food cravings in teens 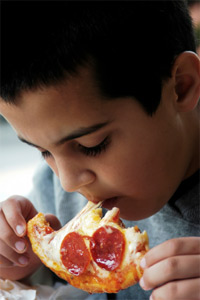 Nutrient-craving hormones can also play tricks on adolescents. Besides the mood changes associated with hormonal shifts during puberty, hormones also may explain some bizarre adolescent eating habits. Rising estrogen levels prompt females to crave sweet and creamy foods, such as chocolate and ice cream. Males may lose their childish preferences for sweets and come to prefer protein-rich foods, which may account for how a fifteen-year-old boy can wolf down three beef sandwiches at one meal. Girls tend to put on more fat during adolescence in preparation for childbearing, and males tend to build more muscle.

Substitutes for sweets to curb your cravings

One trick to curbing your craving for sweets is to substitute them with other options. Here are some of those substitutes you might want to try: